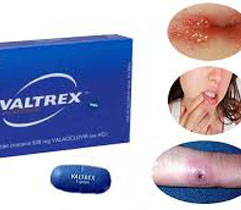 Where to buy valtrex online?

Valtrex has an antiviral activity and is used for the treatment of herpes virus. IthasaningredientValaciclovir. This ingredient is easily absorbed from the gastro-intestinal tract and decomposed to the active metabolite acyclovir and amino acid valine. The maximal concentration of Acyclovir is achieved in 2 hours after the use in the blood plasma, and therefore the therapeutic effect is noticed at the first day of the treatment.

The active ingredients of Valtrex enter the virus DNA and block a formation of new chains. This leads to the break of the current chains of DNA and blocking cell division. Valtrex is not able to completely cure of herpes virus but it quickly transfers virus into a latent form and lowers a possibility of the repeated recrudescence.

In most cases the use of Valtrex helps to cope with the basic symptoms of herpes within 2-3 days. Some patients have a decreased sensitivity to the action of the drug. These are often people with low immunity or those who have had a bone marrow transplantation.

Use and dose of Valtrex

In case of the attack of the herpes simplex virus, it is recommended to take a pill of Valtrex 500 mg 2 times per day within 5 days. The treatment should be started as soon as possible during the first signs of the herpes development on the skin or mucous membranes.

To treat herpes zoster, it is necessary to take 2 pills of Valtrex 500 mg 3 times per day. A general daily dose is 3000 mg. The treatment lasts for 7 to 10 days depending on the disease symptoms.

To prevent cytomegalovirus disease after the transplantation of the internals, Valtrex is used in the dose of 2 g 4 times per day within 3 months.

Valtrex has a rather good pharmacological safety and is approved by FDA for the use by adults and children. But a manufacturer states some side effects which may happen in rare cases during the use of Valtrex: headache, nausea, confusion, and discomfort in the stomach.